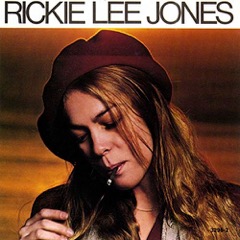 40 years ago this month, Rickie Lee Jones released her debut album. It is one of my all time favourites; for starters, how many other album covers can you name, where the performer – male or female – is smoking a cigar?! (Jay-Z, she was way ahead of you!)

From the first time the cassette got plugged into our car stereo at the start of a family holiday (I wasn’t joking about the ‘40 years ago’ bit), I have no idea how many times I’ve listened to it. Here was a tantalising glimpse into a sunlit Californian world which couldn’t have been more enticing, and different to a Britain languishing at the tail end of the 1970s. Many people will know the opening track, the radio airplay staple “Chuck E’s in Love,” but the rest of the album was our little secret. There’s the smoky, languid, jazzy double bass intro on “Easy Money,” the squeaky fretwork on “Night Train,” the brilliantly abrupt ending on “After Hours,” her male vocalist impression on “Coolsville,” the hilarious hatchet job on Sal Bernardi, who would later become her partner, in “Weasel and the White Boys Cool.” I know every note, chord, bass line, every brush of a cymbal.

So you’d assume I would also know all the lyrics off by heart – that I’d be totally word-perfect.

Actually, no. In fact not even close. And with this particular album, I would never want that to change.

“Now hang on just a minute there Rory,” I hear you say (I’m assuming that ‘affable politesse’ is your favoured style of confrontation). “You’re someone who’s paid to read out words for a living; doesn’t your previous statement rather undermine your calling as a natural, versatile, London based, neutral English voiceover artist?” (I’m also assuming that you’re keen to help with the SEO for my website.)

Yes, of course lyrics are important but, just as important is the mood, the style – and how that song makes you feel. As voiceovers, music will accompany a huge number of the scripts we record. If I’m in a session, a producer will often ask if I’d like to hear the music bed before I do a take. Personally I love NOT hearing it. What happens is that I think I’m going to read a script in a certain way, then I hear the music and it can completely change my style, intonation and energy. Most importantly, those decisions are completely instinctive, because I haven’t had any time to prepare or think. And often that take is the best.

By the same token, we can sometimes forget how musical the spoken word can be. The most obvious example of course is the rhythmic meter of poetry. I used to love reading AA Milne poems to my children, because the rhythm and rhyme were so perfect. “Disobedience” is one of my favourites. This is the first verse and to get the full effect you HAVE to read it out loud!

Care of his Mother

Though he was only three.

James James Said to his Mother,

“You must never go down to the end of the town,

if you don’t go down with me.”

If you’re like me, you’ll have finished the verse a lot faster than you started, as you gradually become more and more comfortable with the rhythm. Note also that there’s no punctuation at all in the first 6 lines – the musicality is just created by the words alone.

So back to Rickie Lee – a hipster way ahead of her time. This album is a masterclass in whimsical moods, imprenetrable LA lingo and late night jazz club moments. Take ‘Danny’s All-Star Joint’ as a particular case in pojnt – I think I can tell you one word every 10. It’s part sung, part spoken, so effortlessly cool, so West Coast, so sassy and a little bit naughty (something about kissing boys behind the magazines). If I were to learn the words, that magic would most definitely be lost.

So no sleeve notes / azlyrics.com (delete as age-appropriate) for me; I will continue listening in blissful lyrical ignorance. All right, just one small sop to the word-lovers: ‘PIP’ in the opening line of ‘Chuck E’s in Love’ stands for ‘Party in Person.’

Want to join the discussion?
Feel free to contribute!

Mary Poppins – what’s with the funny voices?! My On-Air Duel with an AI Audiobook Narrator.
Scroll to top