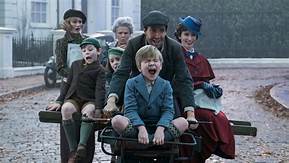 You don’t have to talk about Mary Poppins for long before the subject of accents rears its little head. Thanks to Dick van Dyke, with his “Croiky Meery Poorpins” interpretation of Cockney patois, we almost forget the film’s hard-hitting messages about women’s suffrage and the fragility of the modern banking system (ok, not that hard-hitting!)

So when the long-awaited sequel dropped just before Christmas, a lot of the chatter leading up to it had been along the lines of:

“Oh well, I’m sure the producers won’t be stupid enough to make the same mistake as the original and cast a non-British acto…. What? …. Lin-Manuel Miranda? … Isn’t he American, with Puerto Rican grandparents? … Yes, I did find that out on Wikipedia, but that’s beside the point … won’t he mangle the fine Cockney lingo even worse than Dick van Dyke?”

As a voiceover artist, I admit I am  quite picky about actors getting accents ‘right’ in films. And since I live in London as well, I was even more eager to see the end result. It was a casting decision that showed considerable cojones; either that or Disney don’t really give a toss what a few British critics might say about the geographical veracity of a character’s accent. And anyway, Lin-Manuel Miranda was playing a lamplighter, not a chimney sweep. Huge difference!

His screen presence exuded warmth, kindness – how could you not like him?! The voice was … OK. Not great, but as Don Cheadle in Ocean’s 11 will confirm, a Cockney accent is a tricky nut to crack (although Chris Pratt on a recent Graham Norton episode doing impressions of TOWIE characters is worth YouTubing). There were one or two moments when it was clear Lin-Manuel was not “from these parts.” One example stood out: the word ‘fix.’ In Cockney, it would have a hint of an ‘ee’ sound to it, but if you overdo it by even the tiniest of margins, you’ve jumped all the way from Pearly King to Puerto Rican. These are fine margins and the role was also cleverly scripted so as to avoid too many more “Gor Blimey” bear traps.

But the main thing was, I’d stopped paying too much attention to his accent once Emily Blunt had uttered her first line! I should point out that the most recent film I’d seen in which she starred (and was jaw-droppingly good) was Sicario! So this was always going to be a bumpy transition.

But, seriously, why? Why the voice?

Julie Andrews had sounded like … well, Julie Andrews. She was posh, clear, and with none of the affectations that we got from Emily Blunt. In case you need reminding, the original Mary Poppins was set in 1910 and there is more than a 20 year gap to the sequel, during the Depression era of the 1930s. However, the excessively clipped tones gave the impression that Mary Poppins had been blown off on the east wind, to spend the next 20 years living in PG Wodehouse novels, or had taken a position with a member of the Bloomsbury set, some of whose affectations had rubbed off on her. For historical purposes, have a listen to the interview with Virginia Woolf, recorded in 1937 (clip at the bottom of this article).

In the inter-war period, linguistic affectations were all the rage. This was the era of Brideshead Revisited and the Mitfords. “Off” became “orff,” “girl” was “gel” (hard ‘g,’ not what teenage boys put in their hair) and the stuff that would soon start clogging up our oceans was definitely “plar-stic.”

However, there was one glaring error in her diction.

My late grandmother, who grew up in the 20s and 30s, was made to learn the following poem, as part of elocution lessons, and she often used to recite it to me.

Mr Brown looked out of his house on the South Downs,

Where he saw a brown cow browsing on the plough.

“Down, foul hound!” he shouted, clouting him soundly on the snout.

The purpose was to ensure elongated vowels, and the ‘ow” sound was the most important to master. The mouth had to work vertically, rather than horizontally. If anything, a hint of an ‘a’ vowel would be added, so it sounded like “aow” rather than “eow.”

Why? Well, the British class system of course, where the way you spoke was the first indicator of your social standing. No doubt people went round and round tying themselves up in knots trying to talk in the right way, or as they would have said, “raand and raand.” Because, my dear, any sort of ‘e’ entering the inflection was just infra dig!

In this respect, unfortunately, Emily Blunt’s Mary Poppins was not practically perfect in every way. “Neow” and “eout” were littered throughout her lines. Normally, I might not have noticed this or it might not have bothered me. But the accent practically defined the performance. It was a central thread of this Mary Poppins, and for me it was an unnecessary distraction. Of course, what was all the more ironic was the fact that when she and ‘Jack’ sing “A Cover is not the Book” she does it in a Cockney accent! And it’s brilliant!!

Dick van Dyke may have been a longstanding joke for his role as Bert in the original, but I feel the mantle of “Dodgiest Mary Poppins Accent” has well and truly passed on to a new generation. And don’t tell me you didn’t have a tear in your eye when he appeared at the end of the sequel. I certainly did.

Oh, and we never got the chance to talk about Meryl Streep and her “whatever THAT was” accent!